What is the Promotional Mix?

So often, when someone is asked, “what is marketing,” the response is “advertising.” Marketing is so much more than just advertising! Marketing is about the four P’s: Price, Placement (Distribution), Product, and Promotion. There is a fifth P often that has emerged and that is People (Consumer). It is in the P of Promotion where there is advertising. The Promotional Mix includes: (1) advertising; (2) public relations; (3) sales promotions; (4) personal selling; and (5) social media.  Here is a look at the promotional mix components, some of the concepts associated with each, and clarification of differences. 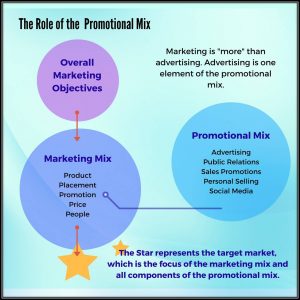 As illustrated here, marketing is far more than just advertising.  The actual activity of advertising is just one component of the promotional mix.   Having consistent messages across the promotional platform is very important as well as recognizing the value of each element to a successful marketing initiative.